I’ve used both Unity and Unreal, and Apple’s SceneKit (yes, it’s a game engine. LOL), then I thought, why not create my own in-house engine from scratch? It can be a good learning process as I will use 2 different Graphics APIs (OpenGL/DX12 and Metal) on 2 different platforms using 2 different languages (C++ for OpenGL/DX12 and Swift for Metal).

This series is not intended to be a tutorial, but a note about my progress, problems and advices.

To begin with, I started this project during WWDC 2018, and it’s been a week since then. I’ve already coded the very basics: Shaders, 3D shapes and stuff. Here’s a sneak peek of my engine and Xcode 10 in MacOS Mojave: 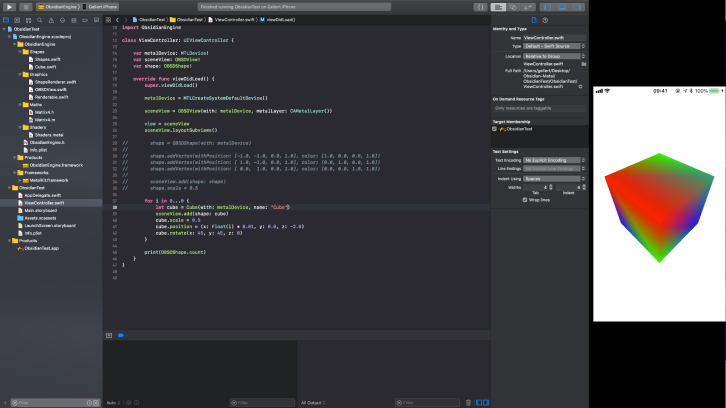 Some major problems I encountered during this week:

To be honest, this was the only issue I had, then again, I didn’t really do much since I was busy with WWDC and my summer school just started this week. I will continue to update this blog in the future after I’ve done something noticeable on my engine.

My future plan on this series is that I will finish the Metal engine first, hopefully to a presentable level, and make a Minecraft clone with it. Not because I like Minecraft, I don’t, it’s because Minecraft has really simple textures, and everything is block, so I don’t have to deal with Blender or Maya, AutoCAD.

After the Metal series, I will move on to either DX12 or OpenGL, which will be done on Windows. I’ll think about it when the time comes, right now let’s just focus on Metal.